Posted 03-25-2013 at 04:30 PM by outofcontrol
This project was going to be months down the road. Once we spent some time with the trailer and did some research, and thought about it.

Our maiden voyage was supposed to be this weekend as well. Then the complexity of having a joint ownership reared it's head. My wife assumed we'd be sleeping in the now plush and private rear Mega-King (see project #3) bedroom. The Brother and his wife also assumed they'd be sleeping in the new (awesome) bedroom. Tensions were getting high, and the 4 week old baby was also having an abnormally loud crying day. Nobody wanted to sleep on the smelly old Gaucho except me.

The end solution was to scrap the camping weekend and instead spend our weekend remodeling the living room. I'm pretty excited, but felt totally unprepared for the action. But for better or worse, we jumped in.

I had a hard time getting used to the idea of scrapping the Gaucho and built in side tables, but I was alone, outvoted 3 to 1.

We started by removing the living room, and quickly realized that the floor didn't go forward far enough. (see project #4) 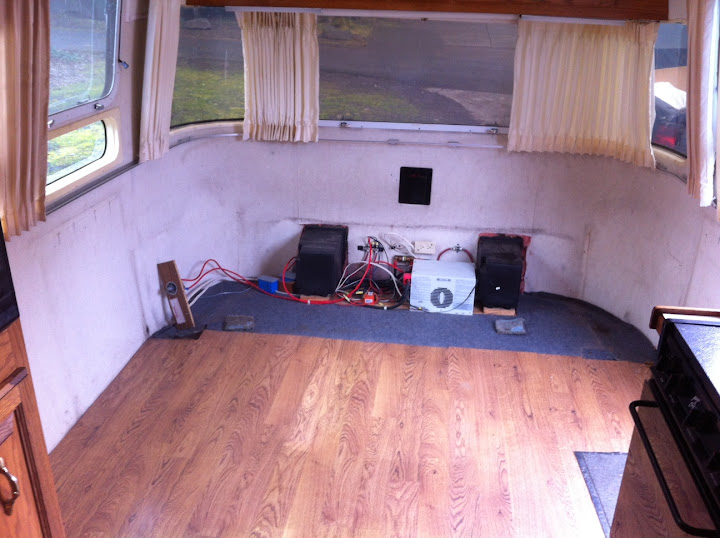 The design is mostly inspired by the work of ddruker here and we're going to pretty much copy his ideas and measurements. I used his pictures and designs as a sales tool to get the rest of the family to agree on a plan of attack. I even got them to agree on placing the flooring across the coach like ddruker did.

More to follow. It's going to be awesome! I don't have quite the woodworking skills that ddruker has, but I have some fun ideas and we're going to work off his basic design.