It's going to be a work in progress. I'll uncover, discover, and recover. It has some old leaks. I suspect the TV antenna and the skylights. I believe the leakage is minimal but I'll see.

We began by removing the living area builtins.

Both sofas out along with the mickey mouse corner table and the finger pinch table.


Before removing the rotted floor sections under the window and by the door, I'll remove those nice blue floor tiles.

They appear to be original because the floor is like new under the tiles and the tiles go under the builtins. They come up like they were never glued with a heat gun.

The whole tile comes up in one piece. Unfortunately the glue stays down and stays sticky. Some comes up with Krud Kutter.

I removed the drapes. The end caps come off and there's a screw in the bottom track to remove and the drapes just run out the end.

I washed the trailer with the power washer and tried Removal stripper. It was s l o w and required multiple applications. Not for me. I even tried letting it sit over night. Still not good. Then I tried CitriStrip. Whoa! BIG difference! It worked fast in one application. I did one side of the trailer, including 1/2 of the top, in one application. It stripped clean and came off with the washer with no problems.

As I progressed, I kept trying different pads, wheels, and polishes. I used a white cotton buffing pad on an electric drill and I used a set of small wheel detailing pads for use in tight areas.

I used a yellow Caswell Treated Vented Buffing Wheel with the black compound to cut the badly oxidized parts - 10" Hole Size: 1/2" BC10

My trailer didn't have a lot of really bad oxidized areas. I used the pad in the picture to initially cut the rear end cap with the black compound.

I switched wheels on the buffers, depending which phase I was on. For the initial black compound cut, I often had the 10" vented wheel on one buffer and a 8" white non-sewn airway wheel on the other one.

This is the way I did the polishing:

I bought a white compound bar but I didn't use it. I used a "spur" buffing pad cleaner. I cleaned up after compound with mineral spirits. There wasn't much cleanup after Nuvite S.

I live in the country and I burned used rags at the end of every day. If I couldn't burn, I'd submerge used rags in water with a lid on the pail. Those rags REALLY burn, so they're dangerous.

One member recommended Busch Super Shine Aluminum Polish. I found it at the auto parts store where I was buying my polishing wheels. I tried it with the Cyclo on the front endcap and it worked pretty good. I had ordered Nuvite S, and when that came in, I tried it and the Nuvite worked better than the Busch. I finished the job with Nuvite, but I didn't redo the part I did with the Busch polish and it'd be hard to see where I changed polishes.

If a polisher wants a little less than mirror finish, I'd recommend the Busch polish. 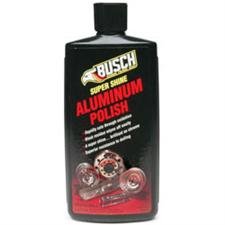 I have the awning arms back on but I haven't installed the roller yet. I intend to sew and install the new awning material myself. I may not get that done yet this year.

Still need some detailing and need to roll out the dent in the lower corner.

I'm happy with the way it turned out. Thanks to all who advised me and supplied me.
Posted in Uncategorized
Views 3229 Comments 2
« Prev     Main     Next »
Total Comments 2